An earthquake with a historic magnitude of 8.8 rocked the Tohoku region Friday, triggering tsunami that wiped away cars, ships and buildings all along the east coast. 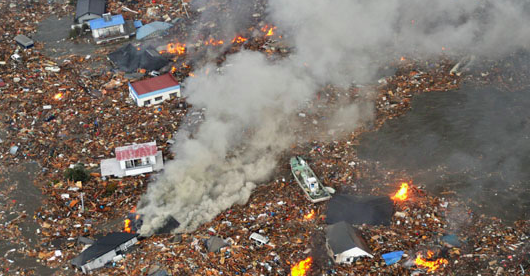 Smoke and flames billow from a Cosmo Oil refinery in Ichihara, Chiba Prefecture, later in the afternoon following a quake-triggered explosion. KYODO PHOTO

The massive quake was felt strongest in Miyagi Prefecture, where it came in at 7, the maximum reading on the Japanese seismic intensity scale, the Meteorological Agency said.

Police said at least 64 people died across an extensive area of eastern Japan ranging from Iwate and Miyagi prefectures in the northeast to Tokyo. The 2:46 p.m. quake also set off fires at scores of locations, as well as a huge refinery inferno in Chiba Prefecture.

The quake was felt hundreds of kilometers away, including in Tokyo, where buildings swayed for a long time and people swarmed out of them.

The temblor is the strongest ever to hit the quake-prone archipelago, the Meteorological Agency said, with a magnitude surpassing the 7.9 registered in the 1923 Great Kanto Earthquake in Tokyo and its vicinity, which left more than 140,000 people dead.

This entry was posted in The Blog and tagged earthquake. Bookmark the permalink.