London, 2nd March 2010 – Canon today pre-announces the release of a firmware update for the multiple award-winning EOS 5D Mark II. Originally announced in late 2009, the update adds 24 and 25 frames per second (fps) recording to the camera’s EOS MOVIE video function, and will be available as a free download from the middle of March. 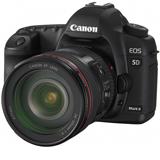 Developed following feedback from photographers and cinematographers, Firmware 2.0.3 further enhances the EOS 5D Mark II’s excellent video performance. The addition of new frame rates expands the camera’s video potential, providing filmmakers with the ability to shoot 1080p Full HD footage at 24fps (actual 23.976fps) – the optimum frame rate for cinematic video. 25fps support at both 1920×1080 and 640×480 resolutions will allow users to film at the frame rate required for the PAL broadcast standard, while the new firmware will also change the 30fps option to the NTSC video standard of 29.97fps.

A new histogram display for shooting movies in manual exposure, shutter-priority (Tv) and aperture-priority (Av) have been added, and exposure modes will also be available in movie mode. Improved audio functionality will allow users to set sound record levels manually using a sound-level meter displayed on the LCD screen. The audio sampling frequency has also been increased from 44.1KHz to 48KHz, providing the optimum audio signal typically required for professional or broadcast material.

With its full frame CMOS sensor and compatibility with Canon’s wide range of premium lenses, the EOS 5D Mark II is already recognised for its outstanding HD video performance. Launched in September 2008, the camera immediately created a wide range of new possibilities for photographers and videographers, and the addition of new frame rates and manual audio levels extends those possibilities even further – allowing movie makers to shoot stunning movies to suit practically any creative purpose.

Extreme sports photographer Richard Walch was one of the first to be given the chance to use the newly updated EOS 5D Mark II to shoot the snowboarding movie “I Love My Friends”. Commenting on the EOS 5D Mark II’s video performance, Richard said: “The addition of the new frame rates opens up a whole new range of possibilities. If you’re a cinematographer, independent film maker or just enthusiastic about making your own movies, get out there and give it a try”.

info thanks to CanonRumors

This entry was posted in The Blog and tagged 5dmkii, dslr, firmware. Bookmark the permalink.